After the liberation of Kobane in 2015, WJAS started planning and building the project of Alan`s Rainbow in the city of Kobane. The first children moved into the orphanage in August 2018. It was officially opened on October 21, 2018.

According to a self-government survey in 2015, there were 872 orphans and 62 orphans after the war in Kobane. Even though many children could be accommodated with relatives, these numbers prompted an orphanage to be built. The project, which has so far been unique in the entire canton, wants to create a new home for children who cannot be cared for by their families. Many of the children experienced severe personal fates at a very young age, such as the attacks by the so-called Islamic State (IS), war, loss and poverty.

In the orphanage, we as a foundation would like to implement a concept that not only offers the children a new home, but in which the educators live with them in a community of solidarity and, despite the traumatic experiences, they can develop a new perspective on life together. The children are accompanied and supported by the orphanage team in all questions of life and their skills and abilities individually and jointly promoted. Children between the ages of one and twelve are admitted.

The facility is designed so that the children both develop and live a secure community with one another, but also have contact and exchange with children outside. For example, a kindergarten was set up for the younger children in the building complex, which children from the neighborhood also visit. The older children go to the schools built by Kobane’s self-government in the district.

During leisure, there are offers for children in the areas of sport, art, music and culture. There is a soccer field near the orphanage and on the grounds of Alan‘s Rainbow there is a playground to which the neighboring children also have access.

Since such work is new in northern Syria, there is a shortage of professionally trained employees. As part of the facility, further training courses include in pedagogy, trauma pedagogy and first aid.

The second building complex houses a women’s education center where a vocational school for young women has been set up. Here young women can receive training in pedagogy and for activities in the health sector. 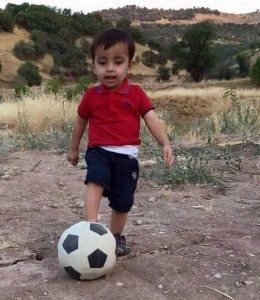 The “Alan's Rainbow” orphanage is named after the boy Alan Kurdi, who drowned with part of his family while fleeing the war in the Mediterranean. His picture went around the world. The project aims to give children hope for the future in their home country. Family members of Alan Kurdi were guests at the opening of the orphanage.

The facility is supported by numerous organizations locally and in Europe. We also receive funds from people and partner organizations in Northern Syria and Europe for the running costs.